This website has not been optimized for Internet Explorer 11. Some functions are not available and display problems may arise. We recommend Mozilla Firefox, Microsoft Edge oder Google Chrome. 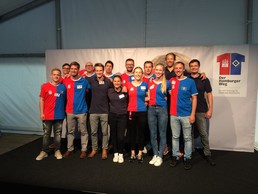 The ‘Schools4Tomorrow’ project was initiated by ‘Hamburger Weg’ in association with the G20 Summit. Around 400 pupils from 20 Hamburg classes took part. Each class ‘sponsored’ a G20 country and received informational material to work through to identify weaknesses and opportunities, as well as risks for ‘their’ country. The aim was to compile a communiqué with ten prepared positions to give to the German Federal Press Office for the G20 Summit held at the beginning of July.

After several weeks’ preparation, the classes negotiated the communiqué together on the last two days of June. REYHER supported these negotiation days with a full brunch box, which helped to energize the round of negotiations.

In addition two trainees from REYHER were actively involved in the project and helped to ensure the process ran smoothly.