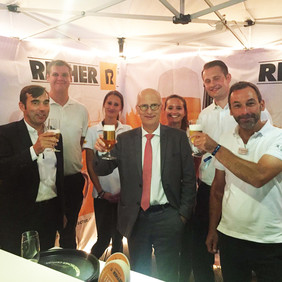 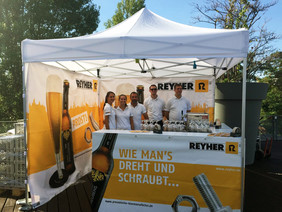 Together with around 2,500 guests REYHER took part in the traditional summer party of the Hamburg Representative Office in Berlin. This represents Hamburg’s interests in the German Federal Parliament, Upper House, and the Federal Government.

The event, held at the beginning of September in the Berliner Tempodrome, is, alongside the State Parliament summer party and the press ball, one of the most important society events for the City of Hamburg. Among the guests were, the Federal Minister for Family Affairs, Franziska Giffey (SPD), Ole von Beust (CDU), a former Hamburg Mayor, as well as Berlin's current Governing Mayor Michael Müller (SPD). Hamburg's First Mayor Peter Tschentscher (SPD) was the official host.

Mr Tschentscher (first picture, centre) insisted on stopping by for a beer at the REYHER & Preußens Pilsener stand and called by for a beer together with CEO Dr. Peter Bielert and the REYHER team.

Numerous Hamburg companies in addition to REYHER sponsored the summer party. Both our Hamburgians and Berlin guests spent an entertaining evening to remember.